I have just endured the . . . whatever it was . . . that was Star Trek: Picard season 2. I may have more to say on the subject in a longer post. Right now, I just feel the need to highlight two three four gargantuan problems that haunt the whole season.

I'm sorry, I have to stop now. They're coming with my medicine.

I tried another Ngaio Marsh mystery, The Nursing-Home Murder.

Roderick Alleyn decides, for absolutely no reason whatsoever, to recreate the crime.

At the recreation, a supporting character--entirely by accident--nearly knocks over a piece of equipment.

This reveals the killer's identity and method.

Also, the killer's motive makes absolutely no sense. He's a fanatical eugenicist, but the victim neither has, nor has any prospect of having, children. (highlight to view)

Recently a close friend forwarded this review to me:

Every Roderick Alleyn Novel (Fiction, Ngaio Marsh, 1934-1982) Roderick Alleyn, the Shakespeare-quoting, handsome, aristocratic Chief Inspector of Scotland Yard, spans the gap between Sayers’ Lord Peter Wimsey and P.D. James’ Adam Dalgleish. Not as inventive (in plot or dialogue) as Sayers, and not as deep (in character and psychology) as James, Marsh still easily beats Christie for human stories, and her puzzles are reliably honest legerdemain, the best kind. The early novels have a Sayers-Wodehouse sort of air, and she never approaches the psychological starkness of late Allingham, but at her best (Surfeit of Lampreys, Scales of Justice, and the near folk-horror of Dead Water, all Recommended) she combines knowing lightness, humanity, and cruelty better than most mystery writers. Many Alleyn novels have a theatrical setting, combining two hothouse genres with general success. –KH

Now, I am well known as a swooning devotee of the traditional whodunit mystery, featuring puzzles and clues and stuff. There are very few practitioners of the art nowadays, although I would be remiss not to cite the inimitable Steve Hockensmith and the always-excellent Aaron and Charlotte Elkins. (Although, come to think of it, I myself have imitated Hockensmith, so maybe he's only mostly inimitable.) I'm always searching for new authors in the classic mold. So nothing would please me more, at least within the confines of the literary universe, than to find that I'd unjustly overlooked Ngaio Marsh.

The thing is, I've never thought much of her. Her writing style is good, but her plotting always struck me as pedestrian at best. On the other hand, my wife likes her, and brought a dozen Marshes to our library. So I resolved to try again. I picked out one of the books I hadn't read, Death in Ecstasy.

There are a lot of melodramatic trappings, but that's it. That's the mystery.

Ngaio Marsh fans, please tell me: what am I missing?

Like it says on the tin, I think about stuff. Also, I get unreasonably irritated when people with whom I might otherwise agree fail to do so. Today's exhibit, therefore, is entitled "How to Be Smarter than Marjorie Taylor Greene."

Greene has been in the news lately because she's facing a hearing, in which various activists are trying to get her disqualified from running for Congress again. I've heard various people, including some NPR folks who ought to know better, who sound like they're practically salivating at the the thought.

I yield to nobody in my distaste for Marjorie Taylor Greene. But . . . let's suppose, for the sake of argument, that the highly improbable has happened. Greene has lost the case, she's lost the appeals, she's been thrown out of office, she can never run for federal office again. Liberals get everything they dreamed of and more.

What about the 229,827 voters who supported her in 2020? Are they suddenly going to see the light? Will we find them holding hands with Black Lives Matter activists, singing "Kumbaya" and peacing out on weed?

Let me know when the magic sparkly unicorns come flying down, too.

P.S. I will continue to point out that my own record as a prognosticator isn't bad.

Email ThisBlogThis!Share to TwitterShare to FacebookShare to Pinterest
Labels: politics

No, of course you don't. That's the problem, really.

Of all my character defects--I can provide lists, with references--one of the most vexing is this: I lose enthusiasm for things. It's not just this blog; it's all of my hobbies. The culpa is definitely mea.

Having said that, the fact is that nobody reads this blog. I mean actually, literally, nobody. So, no, you don't remember me. The Internet, remarkably enough, seems to have survived my several-years' hiatus unscathed.

On the other hand, I said when I started that this was, basically, a way to be obscure on a larger and more permanent platform. Yes, the Internet has survived this far, but why risk it?

So here I am. As proof of life, I offer photographic evidence containing my wife Robin, our emergency backup cat Biscuit, and a small fraction of our books. (Robin is the one wearing glasses.) 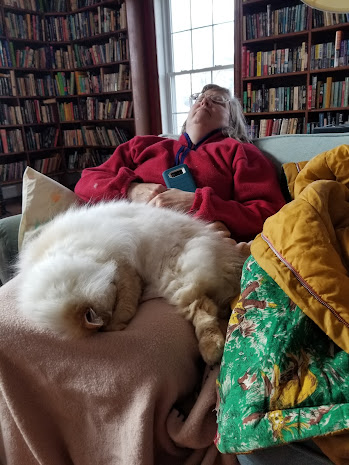 "I think we are likely to see our politics dominated by mobs of insecure and angry white people for some time to come."

Random Impressions From a Visit to Japan

Bear in mind that these are the product of a single trip, covering a mere two cities and eleven days. Don't expect deep analysis here.